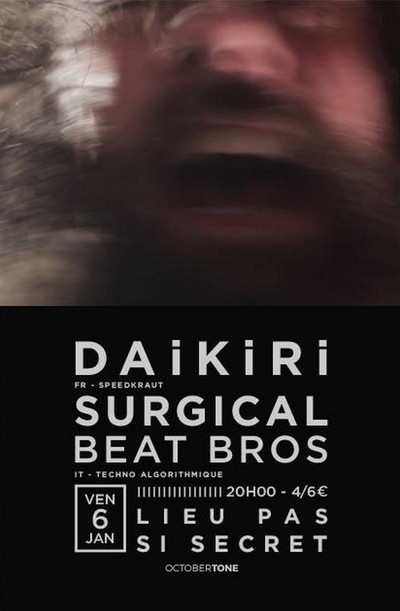 Daikiri is a puppy. His totem pole is the mad jackal.
The rage of one combined with the gall of the other, gives birth to a terrible electric microbe.

Fast and strong, very little transition between the tracks for an outlet effect, which fills the body with spasms and repels the hair.
If you have no more hair, know that their music makes them grow back.

"The duo from Rome released their fourth studio album "BLACK" after 150 concerts and 3 releases in just 2 years.
Their sound is apparently electronic-minimal with regular beats, but the massive use of 4 on floor kicks is just a grid to simplify the listening and stimulate the body!

Behind this regular pulse lies the rhythmic/mathematical perversions by Zitarelli / Recchia, whose texture, even if polyrhythmic, succeed to respect the typical schemes of techno, reworked in a modern way."

You dance and then you cry.