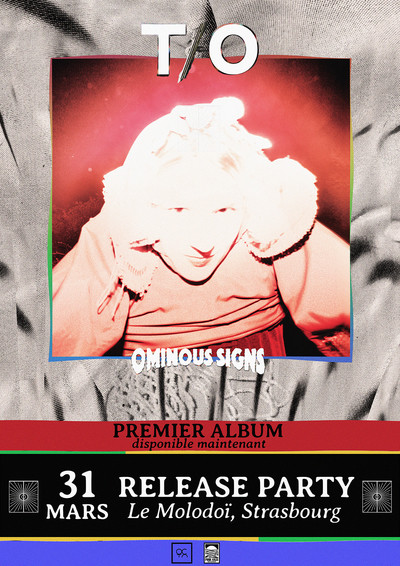 After Eyes Above, which was part of a lo-fi and experimental pop approach, Ominous Signs is setting orchestral rock and kosmiche music straight by becoming more involved in a more electric psychedelic world than before. A progressive rock to which you have to fasten your seat belt to stay on board with each jolt and change of shade.

FFO (For Fans Of): Parquet Courts in the middle of a trip surfing on a Tame Impala wave which would cross the road of MGMT at the bend of a Buddhist temple of which the Flaming Lips would be the monks. And Connan Mockasin of course.

The Parisians of Bryan's Magic Tears seem to come straight out of the wet dream of a slightly retarded post-teen.
This new solo project by Benjamin Dupont (Dame Blanche) ticks all the boxes of the heavy lo-fi: ultra-toxic melodies, guitars alternating whip and caress, his ghostly and convoluted name referred to a Parisian acid dealer.

FFO: Les chagrins d'amore in 1990 with Crocodiles for the garage, My Bloody Valentine and Seefeel for the spleen and Pavement for the low-fidelity.

Worthy representatives of a French neo-garage scene, which does not hide its Australian-Californian influences, The Bad Pelicans have developed in two years the annoying habit of instantly returning each of the rooms they skim.
After three demos released on tapes and already on sale out, their first 8 tracks, soberly entitled "Best Of", will be released in early March on Stolen Body Records.

FFO: Magnetix listened to on the highway with the door open and good taste

Based in Strasbourg since the end of 2014, Ross Heselton takes roots in poetry and blues, he digs a form of song with primitive instrumentation of which orality is the key.
He will be exceptionally accompanied by Augustin Soulard with modular synthesizers.